I’m feeling a bit bruised. Last week, I tried to tweet, but as a newcomer to twitter it was more of a peep or cheep.

Nobody seemed to hear me. I squawked into the ether and the world of twitter went on as if I didn’t exist. 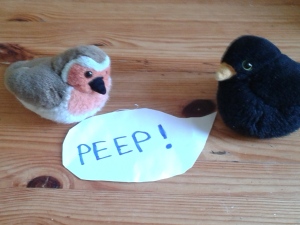 I stared at the little heart button beneath the tweets and thought how nice it would be if even one person would click on it. Just one, that’s all I asked. My feeble tweets had cost me a lot of nerves, and I felt that I was owed a wee bit of encouragement.

Technology overtook me around the time that my first kid was born. All I could do was keep up with the feeds and the nappy changes, or rushing babies to and from childcare. Meanwhile, people began to connect with texts followed by smartphones which made them available at all hours of day and night. I didn’t want any part of it, especially since I was already available around the clock to several small people.

Okay, so it took a lot to cheep into the big, busy world of the internet. Maybe I was expecting too much if I thought anyone was going to take notice. Certainly that little heart symbol which remained stubbornly empty came to take on too much significance.

Just because the big, bad internet didn’t give me a thumbs-up, I began to think that maybe I was no good: an unemployed, middle-aged mum who can’t get the hang of this new way of communicating.

I felt like I was talking in a crowded station where no-one had time to stop and listen. When I realised how insignificant my little cheep was, I felt small and unimportant and it was hard to remember that this isn’t a measure of my value. Maybe God loves me despite or even because of my smallness.

I’m no good at networking, either in-person or online, so I think I’ll have to just accept that tweeting is not for me.

The other day, I read that even popularity is for sale. if your product or page isn’t getting enough likes, you can buy fake likes on the internet. However, I’ll give it a miss.

Rather than tweeting or bellowing or lowing or howling or braying any more words into the ether, I think I’ll take time to listen and try to visit the pages of every person who’s been interested enough to follow or like my blog.

And please let me know in the comments line if there’s anything you would especially like to be read.