Canach is on her travels and seeing some lovely parts of Scotland. Not much internet access, but that is probably a good thing!

I’ve heard some good news from my friend who was separated from her son. A decision has been made and he will be coming back to live with her. I really hope that everything goes well. I have appreciated people saying that they would pray for her. Sometimes when you care about someone and you’ve been worrying and trying to pray for them for a long time you get kind of, I’m not sure what the word is, reconciled or exhausted. At that point, prayers don’t feel very effective, and so it’s good to know that a few other people are adding theirs. Thank you. 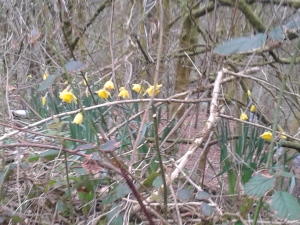 I recently faced a dilemma which most converts come across at one time or other: What do you do on Sunday when you are visiting your non-Catholic relatives? There were three possible options:

Option One – attend the Protestant church with my parents

Because I more or less developed an allergic reaction to any form of organised religion (see Don’t go to church), this was a sticky option. I had pointedly avoided my parents’ church for years. I wondered if I should go to show respect for their beliefs, and to make the point that I have changed. Before I announced that I was becoming Catholic, a request to attend my parents’ church would have been met with unreserved delight, and hope that I was finally seeing the light. However, nowadays it could potentially cause a lot of embarrassment. I had no idea what I would say if some well-meaning person turned to me after the service and asked, “Which church are you going to these days?”

When I walked into the church to light a candle, I felt uncomfortable almost to the point of feeling sick. It was the second hardest thing I ever did after telling my parents that I was going to become Catholic.

A friend of mine, who is also a convert, gently pointed out that it was possible to just do nothing and not go anywhere. I didn’t find this option very attractive, because it seemed like reverting to the default position I had held through all the long years of agnosticism. I was afraid of disappointing God by just doing nothing.

I tried to pray, and ask which choice would lead me a little further along a path of peace and reconciliation. However, I received no clear answer. All through Saturday, and even on Sunday morning, I was as undetermined as Schroedinger’s famous cat, whom Terry Pratchett said could be dead, alive or bloody furious. I was in a superposition of states; I simply did not know what to do.

Shortly before I would have to go out, if I wanted to make it to any kind of religious service, I realised that I was in a state of such tension, that I would become physically ill if I tried to attend church. I fell back to default position 3 with a bump. I wasn’t going anywhere, and the relief unwound at least five knots in my stomach.

I worried that I had let God down and disappointed Him. Doubts snapped at my heels like yapping terriers. Why on earth did I have to rock the boat by becoming Catholic? Why couldn’t I have just shut up and put up, and remained in the Protestant church, even though I was never really at home there, and towards the end felt pretty miserable. Perhaps I was meant to feel miserable.

On Monday morning, seeking some kind of peace or at least a feeling of resolution, I set out on a long walk, which I timed to coincide with Mass. When I arrived at the Catholic church, about forty elderly people were already there saying morning prayer beforehand. I didn’t have a Missal and I didn’t catch all the words, but what I heard was enough. The Psalms and Gospel verses reaffirmed my faith. I was participating in something which went far beyond my troubles. I could only see a few dozen people with greying hair, some of whom very obviously had their own physical ailments, but these prayers were being said in churches across the world. This dark, echoing, rather ugly church seemed in some mysterious way to graze the edge of something much, much bigger. I felt still and safe in what had once been the heart of the enemy.

After Mass, I had an image of myself as a tiny, frail bird. In my mind’s eye, it was bright yellow, like a canary, but it couldn’t have been a canary, because I can’t sing for toffee. I imagined that Christ was holding the tiny bird in His hands and gently protecting it, because it was too small and weak to fly far.

I felt that He was gently reproaching me for my contortions, when I tried to stretch tiny wings and be in two places at once. He knew that Option 3 is the only one I can manage right now.

He is in both places, but I can only be in one. Someday, when I am strong enough and whole enough, He may send me out to flit between the two places, but it will be a thing of lightness and joy, and not a fearful obligation. I will know within myself when it is right.