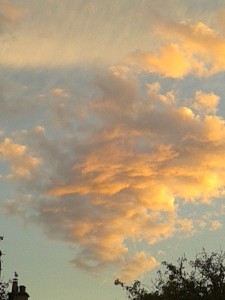 Last week the Pope visited the Lutheran church in Sweden in order to mark the 500th anniversary of the Reformation.

It might seem strange for a Catholic Pope to commemorate in any positive way an event which caused a seemingly irreconcilable split in the Christian church. However, Pope Francis said, “With gratitude we acknowledge that the Reformation helped give greater centrality to Sacred Scripture in the Church’s life.”

When I first became Catholic, I might have felt threatened by this. I wanted to assert my Catholic identity by kicking against the church I had come from. There was a very great temptation to see everything Catholic as good, and what I had left behind in the Protestant church as bad or at least inadequate.

However, I’ve come to recognise that a part of me will always be Protestant. By becoming Catholic, I didn’t change my personality or my family background. A priest who is a Protestant convert told me to treasure this part of me, because it would make a positive contribution to the church. I didn’t want to listen to him at first. However, I now recognise the wisdom of what he said.

If Christ was here today, I am sure that he wouldn’t stick to one church and ignore the rest. He would reach out to all sorts of people in many different kinds of churches. He would also hang out with people who wouldn’t dream of darkening the door of a church. Christ would be found in pubs and betting shops and at street corners. He would talk to homeless people in doorways and lost and lonely people in mental hospitals and care homes.

During his ministry, the sharp end of his tongue most often fell on the Pharisees and Sadducees, the religious leaders of his day. He criticised them for burdening people with rules. In the stories he told, the poor and dispossessed are invited to a wedding feast and a father gives the son who squandered his fortune a lavish welcome.

Jesus was someone who tipped over conventions and broke down barriers. He healed on the Sabbath day. He mixed with women. Not only that, he mixed with women from other religious backgrounds. His disciples were astonished to find him conversing with a Samaritan woman. He healed the daughter of a Canaanite woman and the servant of one of the Roman soldiers who was occupying Palestine.

Five hundred years ago, part of the Christian church branched away. Since then it has divided many times. I was brought up in a church which had split at least four times since the Reformation. There are so many differences in interpretation of the Bible and forms of worship that the differences between churches seem irreconcilable. However, what is impossible in a human level is not impossible for God. Perhaps, beneath it all, there is an underlying unity which we miss because we are so concentrated on the surface details.

What I am sure about, is that Christ is not constrained by our barriers. He sees what we cannot. In an article in the Catholic newspaper, The Tablet, the Lutheran archbishop emeritus, Anders Wejryd, said of the Pope’s visit to Sweden, “When it comes to ecumenism, the first stage is diplomacy. That you acknowledge that the other is there and that the other church is more or less a real church, even if you don’t share all of its opinions.”

He describes what to me is a Christ-like attitude. At a time when politics seems to be increasingly about divisions and Us against Them, it is advice which could be applied not just to religious differences, but to our daily life. Barriers will only be broken down when we learn to see others as they really are.

3 thoughts on “No-one has a monopoly on Christ”