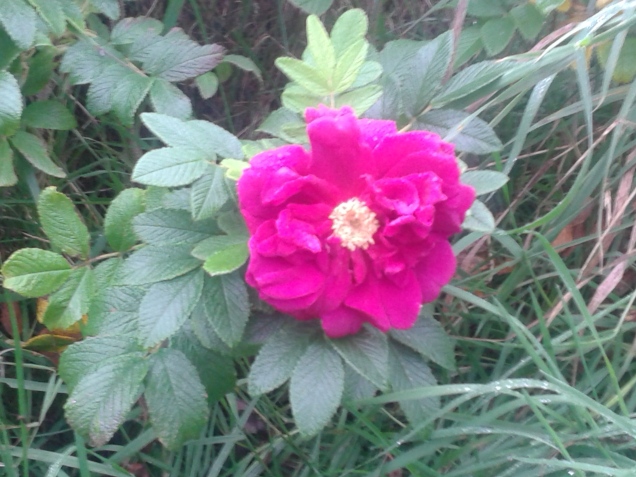 A homemade gift
I was the kind of kid who not only watched the BBC childrens’ programme Blue Peter, but also tried to make the things that they showed. One time, they showed how to make a pen pot and letter holder out of a toilet roll tube and a cardboard box. Of course, their version looked wonderful, because they brought out ‘Here’s the one I prepared earlier’, covered with a slick, glossy paint.

Well, I followed all the instructions. I covered the cardboard box and the tube with paper, painted them and stuck them together. So far, so good. I thought it would make a really good Christmas present for my parents. However, things went wrong when I tried to paint it. I chose brown and navy blue as I thought that they would give me a sophisticated, office sort of colour, but my cheap paint blocks produced a hideous, streaky colour which wasn’t quite what I had in mind.
I wrapped it up in Christmas paper and presented it to my Dad. I had to explain its function, and hoped that he’d be able to use it even if it didn’t look like the Blue Peter version.

A few months later, I was going through my Mum’s bottom drawer where she kept tights and socks (no idea why) and I came across my pen pot, broken into two pieces and clearly unused. I put it back so that my parents would never realise I had seen it, but I carried away a feeling of hurt. It wasn’t the best pen pot, but I’d put so much into it, and it would have been nice if it had been used.

What should we do with gifts?

I am not telling this story, because to complain about my parents or air some unhealed wound from childhood. I have been through the same thing many times as a mother: ‘what a beautiful pot!’, to the hideous item in coiled clay which will be displayed for a while before being quietly cleared out.

The reason I remembered this incident is that I have been thinking about gifts, and come to the conclusion that the most hurtful thing we can do is refuse to use a gift. Even my dog gets depressed when I don’t accept her sometimes over-zealous protection (barking at almost every dog which crosses our path).

The parable of the three servants

I was set off on this train of thought by the weekend Mass reading on the parable about the master who leaves his three servants money (Matthew 25:14-30). One was given five talents, one was given two and the other one. The servants with the greater gifts traded with them and made more money. The servant who had the smaller gift just dug a hole in the ground and buried it.

The priest’s homily was all about how we’re reluctant to use the gifts God gives us, maybe out of fear, or maybe because we don’t want to appear vain.
What he said hit me right between the eyes. I cried all the way through Mass. It was one of those occasions when the presence of Christ in the Eucharist got under my skin into my deepest self and showed me my faults and my fears. I think that some of this goes on at a subconscious level, so it is something difficult to put into words.

I need to pray not just for myself, but for others who are unable to work and find it difficult to share their gifts: mothers who struggle to find work after taking time to look after children, those who’ve lost their jobs and are unemployed, those with health problems, young people who don’t believe that they have any gifts.

The other thing I cried about is that I know suppress one of my gifts out of fear of rejection or fear of it just being about my ego. That gift is my desire to write. The Presbyterian part of my mind has, at times, almost convinced me that wanting to write is sinful and that I should stop it altogether. When I write, even if I write a blog about faith, I do it sneakily, hoping that God isn’t looking.

Some time ago, I had actually convinced myself that God wanted me to stop writing and went to Mass to hand myself over to God, but I had to rethink; the reading was this parable about the three servants and their talents.

I even took this to confession and told a priest that I was worried that writing was a sin and that I was prepared to give it up. After a long pause, the priest told me that writing was a gift God had given me and that I should use it as long as I didn’t write something which would harm anyone else.
So I’ve decided to stop being afraid of rejection and try to get some of the stories I write published.

Even if my gift is only worth one talent rather than five or even two, it’s not an excuse for burying it. I might think that my talent isn’t good enough in comparison with others, but God has given it to me for a reason.

It’s my part to do what I can to use and share my gift. What happens then is in God’s hands, whether I have many or few blog followers, or whether people want to publish or read my stories. I just have to try my best and trust and try not to let that spiky thing called the ego come into it.

This week I came across a quote by the Scottish writer Muriel Spark, famous for ‘The Prime of Miss Jean Brodie’. She was brought up Presbyterian, but became Catholic in mid-life. When asked what she had achieved as a writer, she said:

‘I have achieved myself. I have expressed something I brought into the world with me…’

I hope that we can aim to build a society where every person has the opportunity and confidence to express what is uniquely them; the gift they brought into the world with them.

I have been thinking a lot about Nazanin Radcliffe, the mother of a small child who was living and working in Britain, but was jailed when she returned to visit her family in Iran. She is currently being held without charge in solitary confinement. I’d like to share a petition for her release Free Nazanin Radcliffe