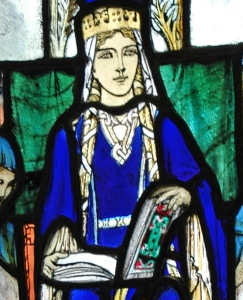 Sometimes I think, read, write and even dream in Gaelic, but the language which I have learnt and love is spoken by less than 2 % of the Scottish population. It was once a national language spoken by all sections of society from the Scottish royal family down to the ordinary people. Placenames show that it was spoken in almost every corner of Scotland from the Borders through to the Western Isles.

Was Queen Margaret to blame for 1000 years of language decline?

Queen Margaret was born in Hungary and returned to England as a child where her brother had a claim to the Anglo-Saxon throne. After the Norman invasion in 1066, she set sail for the continent with her family, but a storm caused them to be washed up on the shores of Scotland. They were welcomed by King Malcolm Canmore (Ceann Mor or big head in Gaelic) who fell in love with the beautiful Saxon princess.

He eventually persuaded her to marry him and they had eight children together. He adored her and it is said that the language of the court was changed from Gaelic to Saxon to make her feel more comfortable. Many people say that this was the first step on a slippery road which led to what was once a national language being on the UNESCO definitely endangered list.

Because of this, I haven’t felt particularly warm towards St. Margaret. However, Scottish saints are quite thin on the ground and I feel that I should take another look at history.

Is it fair to blame one lady for one thousand years of language shift? Both Queen Margaret and her sons encouraged Norman and English families to settle in Scotland, but many of them became Galicised (such as clann Fraser or na Frisealaich). Robert de Brus was one of these Normans encouraged to settle in Scotland by Margaret’s son David 1st.  He married a Gaelic speaker and his son Robert the Bruce, possibly Scotland’s most famous king, grew up speaking both Scots and Gaelic.

The 12th to 14th centuries, after Queen Margaret’s death, were a time when Gaelic culture enjoyed a golden age with the Lordship of the Isles, a semi-independent kingdom on the Western seaboard of Scotland.

Gaelic was spoken by the Scottish Royal family until almost five hundred years after Queen Margaret’s arrival in Scotland. King James IV (1473-1513) was the last Scottish King to speak Gaelic.

Other factors contributing to the decline of Gaelic

Many other things have contributed to the decline in Gaelic, such as the Iona Statutes in 1609 which stated that Gaelic chiefs had to send their eldest sons to be educated in the lowlands. They learnt a foreign English-based culture and eventually come to despise the culture they had been born into.

The schools act in 1872 brought in English as the sole medium of teaching. This was later modified in the early twentieth century to allow some teaching of Gaelic at the teacher’s discretion. However, Gaelic was still marginalised. My grandmother was fortunate to have a teacher who taught her to read and write her native language, but a generation later my father was taught to be ashamed of it. This was a major factor in not passing it on.

I’ve wandered a long way from St. Margaret of Scotland, but the point I’m trying to make is that it would be ridiculous to blame an 11th century Queen with Saxon origins for the fact that I grew up hearing Gaelic being bounced around above my head between adults without being able to speak or understand it myself. Many, many other things contributed to that situation, and my story is by no means unique. I know many people my age who have Gaelic speaking parents, but grew up unable to speak it themselves.

A queen who became a saint

So what made Queen Margaret a saint? She and Malcolm had eight children which just about qualifies her for sainthood in my opinion! However, she found time to do a lot of other things.

She rebuilt the Abbey set up by St. Columba on the island of Iona. She set up a free ferry from Queensferry in Edinburgh, so that pilgrims could cross the Forth and visit the relics of St. Andrew in St. Andrews. She fed the poor and introduced reforms to the Scottish church to bring it into line with the way things were done in the rest of Europe.

What was most important wasn’t just what she did (she sounded as if she was a very busy lady), but the fact that she tried to live a life of devotion and prayer.